Those first moments that you’re holding your newborn child is unlike any other moment you have ever experienced. Even though your body is physically exhausted, as soon as that squirming baby is laid against your chest a rush of strength, pure and true, flows through your body and you know that you will give your life to protect this tiny child.

Micah and I laid our heads together, just watching our son as he kicked his little arms and legs, wiggling his way straight into our hearts.
Tenderly, Micah left Caleb up and handed him back to the OB who gave him to the nurse to clean up. Even though I was a bit out of it, I motioned for Micah to go take a picture… his first picture… of our little son. 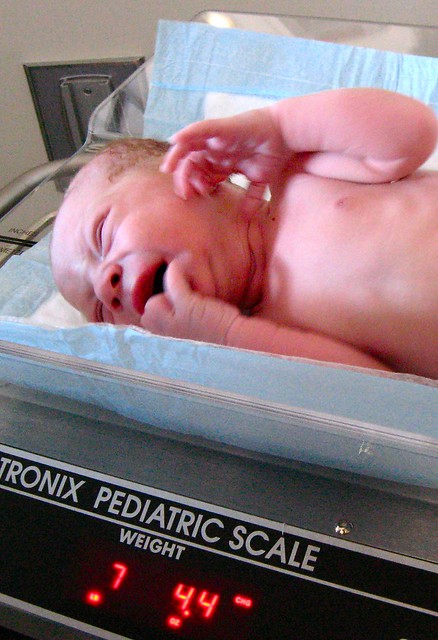 While they finished cleaning Caleb up, the OB helped me pass the placenta, catching it in a large pan. She then asked if I wanted to see it (as apparently some women are crazy enough to want to?), Micah took a peek (another mistake) while I politely passed on that honor. He said that it looked like my guts had come out of my body.
Thank you for that lovely description, I do believe I’ll go back to thinking happy thoughts about my son now.

After weighing him, measuring him, and make sure all the body parts where in the right place, they bundled Caleb up and handed him back to me. Oh, my heart overflowed with love with this little life. I love him so much that my chest literally hurt, even as I brought him close to suckle, his little mouth rooting for that life-giving nourishment. As he latched on for the very first time, I looked at Micah and the tears in his eyes mirrored the tears in mine. It had been a long, hard road, but finally, we were parents. Our family was complete.

As the nurses cleaned up, the OB proudly announced those birth statistics that all the grandmas love to hear and compare.  At 2:14pm on Wednesday March 17th, we gave birth to a healthy boy weighing a surprising 7 lb 4 oz (we had expected him to weight much, much more) and measuring 20.5 inches long. From the brief glimpses we got, it looked as though he had blue eyes with blonde hair to boot. 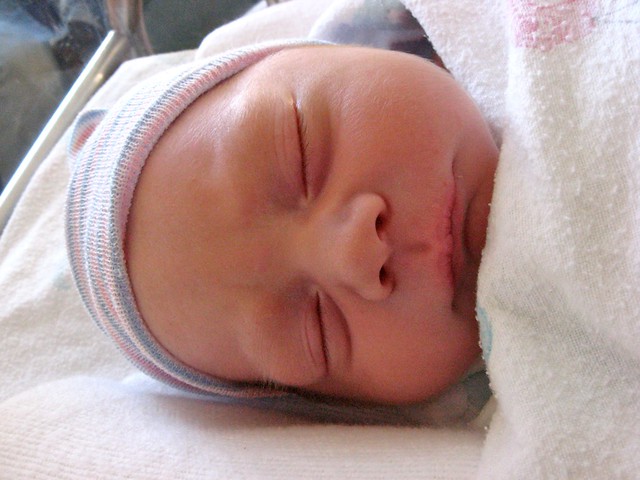 In other words, perfect. 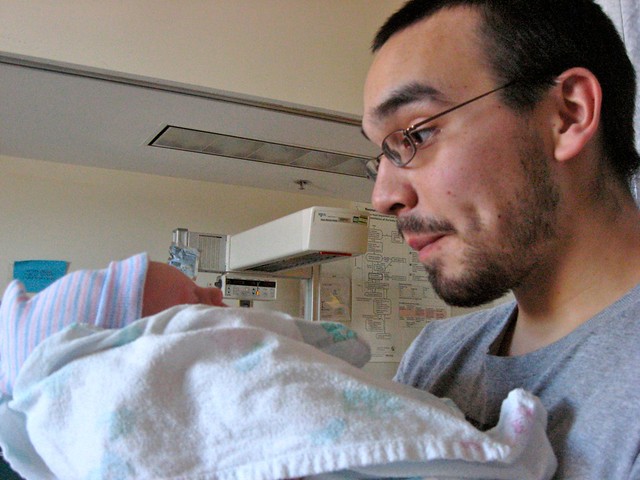 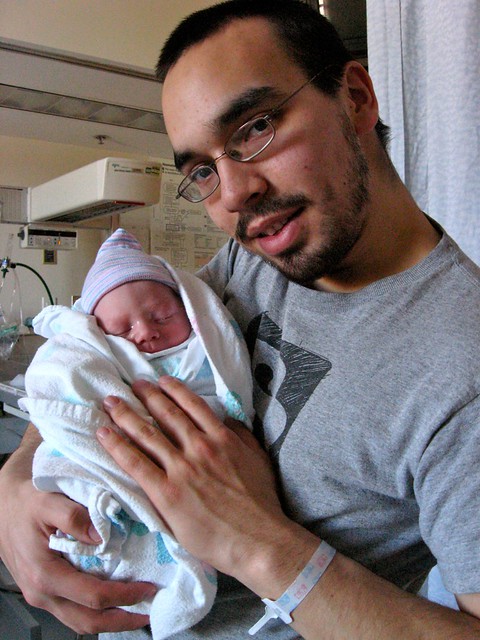 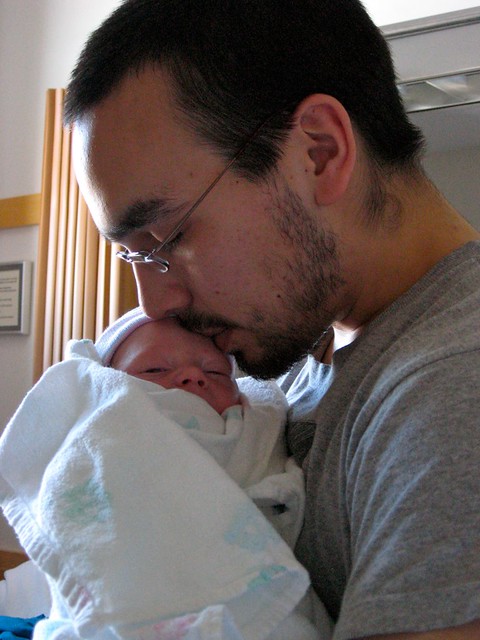 It was two days before my due date and the baby that we thought was going to be late ended up being a bit early, but none of that matter as we held him in our arms. Micah went out to let his brothers know the news, who in turn would alert the world (i.e. Facebook) that the Peter Boys lived on! (Family joke) As soon as he got back into the room, we got on the phone and called the grandparents, the siblings, my best friend from grade school… we wanted everyone to know the good news. It was so wonderful to hear the laughter, the crying, and the hollering (from my southern family). All these people had prayed for us, encouraged us, and wanted only the best for us, and now they were able to share in our joy.

And what about Momma? We called her as her plane was closing its doors and getting ready to leave non-stop for Chicago to Anchorage. Just a few more minutes and she would have been left with 6 hours of wondering whether or not she was a grandmother yet. Part of my heart truly believes that Caleb hurried up that last hour just for his Grandmom, so she would know.

A few minutes later, Micah’s brothers joined us in the room to hold their newest nephew for the first time. It was so amazing to see the smile on Nathan’s face as he looked into Caleb’s eyes, only to have Caleb look right back at him. That is a moment I won’t forget. 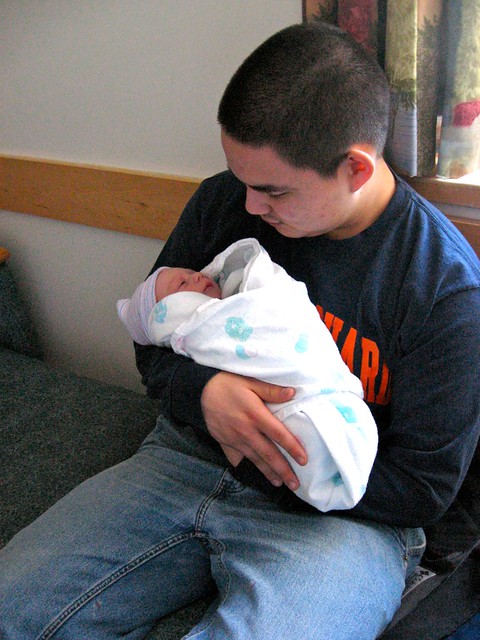 The nurse soon came in and shooed out the boys (making sure we got the baby back first!) and began to get me ready to move to the regular day room. Massaging my stomach, she suddenly pushed down and with an unladylike *BLURP* whatever used to be inside was now outside. Micah and I both agreed that it was very weird to witness. I said, imagine feeling it then. Helping me to the bathroom, the nurse helped me get changed into a clean gown and under things, and so the process of becoming a woman once again began.

Settling into the wheelchair they provided for me, we rolled through the L&D unit to the regular day room. All the private rooms were taken and so they gave us a double room, which was bigger, and just said that we were welcome to use the entire room but we would have to move to my side should some else be placed in the other bed. We were thankful for the additional space, but a little disappointed since it meant that only one person could stay the night at a time. 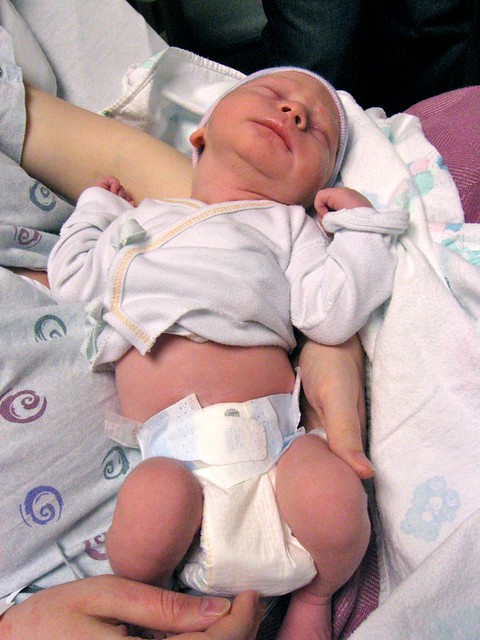 Lying back in bed, with my pillow behind my head, we watched as Caleb settled in for his first nap of his new life. He had the most perfect features of any baby and I was amazed by every little detail, from his long fingers to his pert little nose, from his rosebud lips to his soft downy hair. Everything about him was simply perfect and I gave thanks to God for blessing us with a healthy child. He had rewarded our faithfulness in such great abundance. 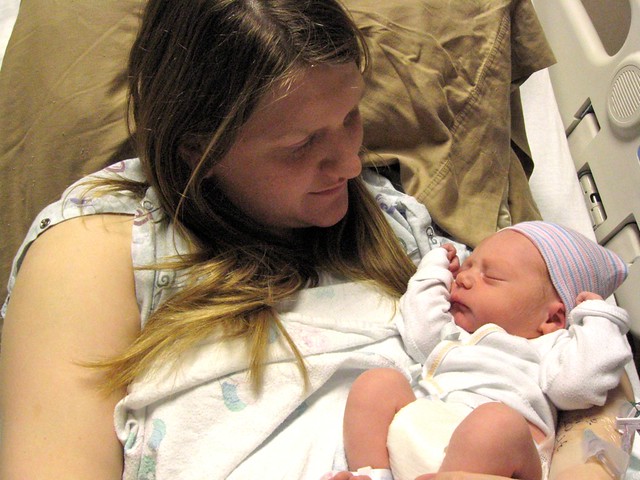 When Caleb woke up it was time for a milestone: his first diaper change. Micah, of course, was blessed with this great honor. And yes, it was the icky, sticky stuff. 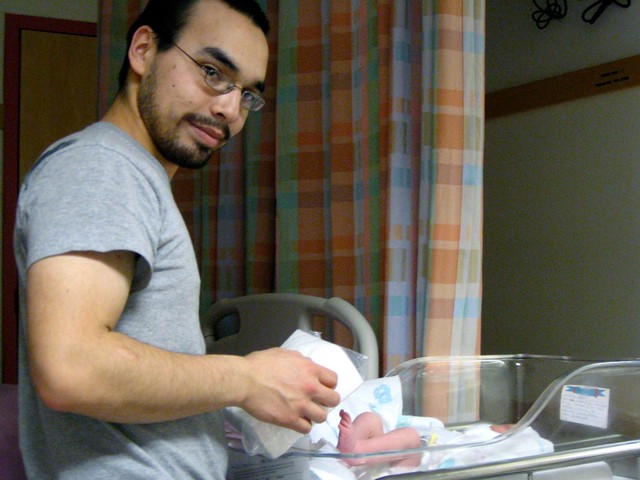 By this time it was after 4 o’clock and I felt as though I had run a marathon, swam the English Channel, wrestled with a grizzly, and drove 30-hours non-stop across the country. In other words, I was tired and I was hungry! Ordering dinner, I waited in anticipation, hoping that I would stay long enough for the food to arrive. Thankfully, they were prompt and the food arrived, tasting like manna from Heaven. The best part was that for the first time in nine months, I didn’t throw up after eating!

With my tummy full, I laid back, closed my eyes, and drifted off to sleep with my sleeping peacefully in the bassinet beside me. It was a good thing I slept then because a few hours later, visitors began to arrive! Friends and family (some that we didn’t even know lived in town!) arrived, brining flowers, cards, but best of all, prayers. All the “grandmas” loved on Caleb, exclaiming over his tiny toes and little nose. Our friends, some of whom were leaving for the airport that night, thanked Caleb for coming before they left.

After a while, the visitors waned off, the brothers headed home, and it was just Micah, me, and our baby boy. Our family. 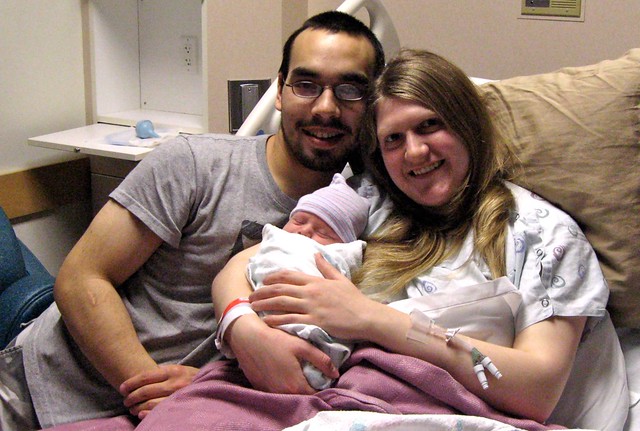 Talking softly, we played with Caleb, marveling over the change in feeling from even just the day before. 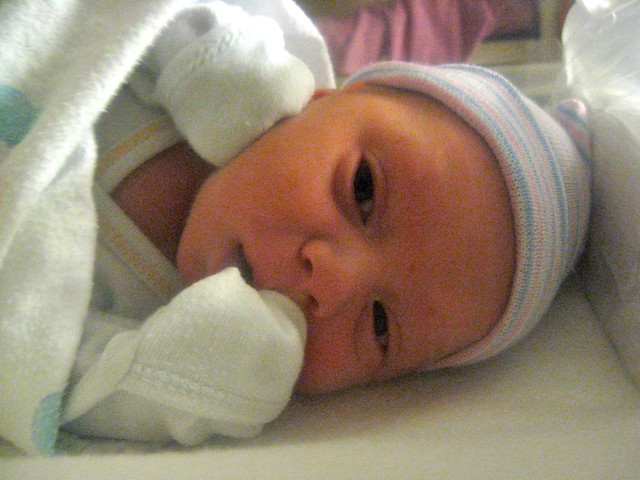 Truly, a transformation had taken place. We weren’t just newlyweds any more, we weren’t college students, or even just “kids” … now, we were parents.

Soon, it was 9 o’clock and time for Micah to head to the airport to meet Momma. Caleb fell back asleep in my arms as I laid back and rested while we waited. 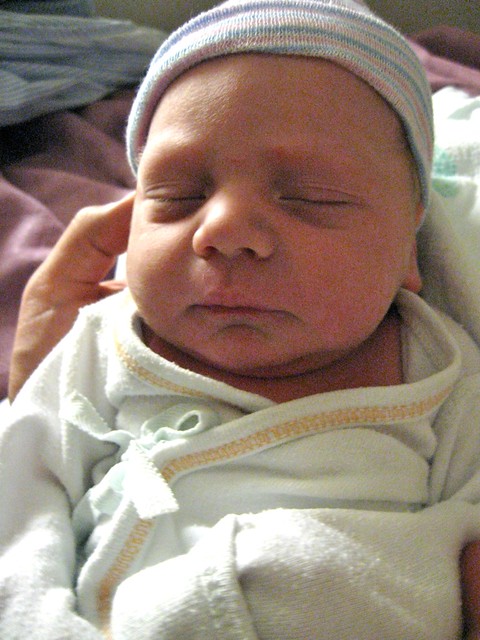 It seemed as no sooner did I close my eyes than I opened them to find my mom coming through the doorway, all full of smiles. 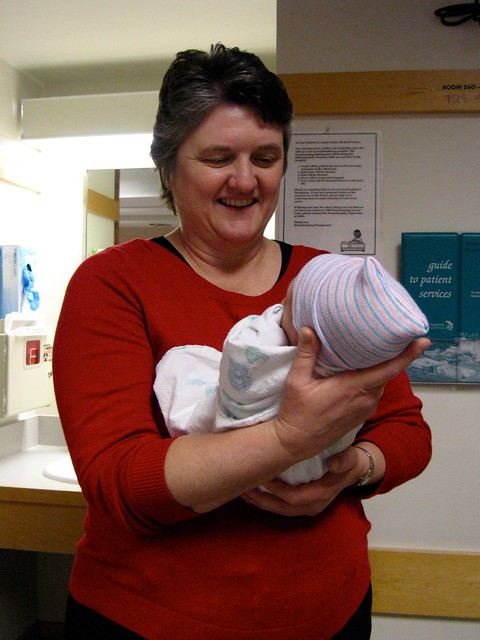 And then I cried.