Okay, I'll admit it. Things are tight right now. Really tight. Between the lagging economy, ever-present bills, household expenses, and the as-sure-as-death-and-taxes "unexpected" expenses, this one-income family has to really cinch in our belts every couple of months. The summers are especially hard on us because we don't have the scholarships from Micah's schooling that help out with living expenses. Thankfully, school starts back at the end of the month and we'll be sitting pretty this time September.

But in the meantime...

Here's something amazing- I haven't bought groceries in three weeks. Wait, I take that back. I did buy a single loaf of bring early last week. But other than that? Nothing.

It's been interesting, that's for sure, especially in the meals department. I've been using up our pantry and freezer items (which is good to do every three months or so anyway), but it's kind of hard when I can't really go out and and buy additional ingredients.

But that's actually been easy compared to having to cope with what's really being missed: flour tortillas and tortilla chips!

I don't know how it is in your home, but those two items have been staples in our home since pretty much our first week of marriage. The perfect snack is chips and salsa. The perfect meal is enchiladas (my enchiladas).

Thus, at this moment our life cannot be perfect.

I hear the crunch of chips as I'm driving down the road, at work, while sitting in a silent house.

I'm going insane from lack of tortillas. Hmm.. does that mean I can get a doctor's prescription for them?

Eh.. somehow I don't think that's covered under our insurance.

We had some leftover corn tortillas and have attempted to use those, but sorry, the only time corn tortillas don't taste like cardboard is when they're deep-fried and poofy. It simply isn't the same.

And of course, matters only become worse when The Pioneer Woman posts something like this: 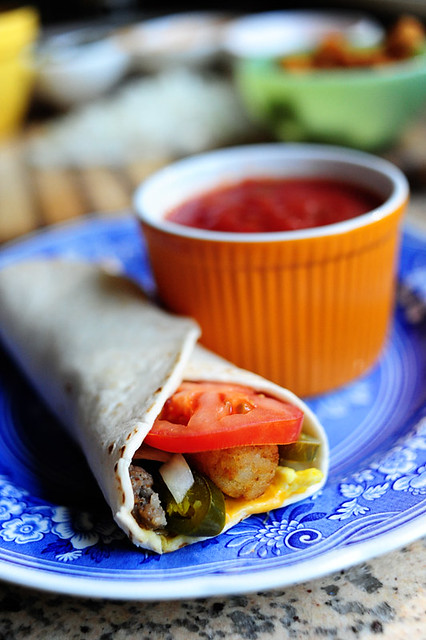 I think she did it on purpose.

In fact, I'm convinced of it.

I'll go hide and eat my stale granola bar now. And if you don't think that a granola bar can go stale...

After nearly five months, I'm finally doing it. I'm finally writing down Caleb's birth story before I forget all the precious details of the day that would change my life forever.

So here is part 1 of the story. It's already shaping up to be pretty long, so I don't want to overwhelm you all at once.

Here it us, the story of Caleb's birth:

My due date was Friday March 19th, 2010. In my family history, babies had a habit of running a week or two late, and so we weren’t expecting Baby (remember, we didn’t know his gender) to show up for awhile. Momma (my mom) was supposed to arrive that Wednesday and the next day we were planning on walking the town, in hopes of urging this little one to come before she left in two weeks.

It was Tuesday, the 16th, and I was just finishing up at work, my last day of work actually, before I would begin my scheduled maternity leave. For the past week there had been no contractions of any kind, not even any Braxton Hicks, just the regular squirming by Baby. As we made our way to the door, co-workers teased me about never having the baby and that I would be pregnant forever, and then one person said that I had better watch out, that this baby would surprise me when I least expected it. Smiling in response, I waved good-bye, logged out of my computer for one last time and headed home.

The rest of the evening was pretty uneventful. Seeing how I was three days short of being 40 weeks, there wasn’t much that I could do, but what I could do, I did a lot of. With Momma arriving the next day, I waddled around, cleaning the kitchen, the bathroom, making sure the sheets were cleaned and the floors were vacuumed. Oh, and I cooked dinner for Micah and his brothers, too, though don’t ask me what I cooked. Once the housecleaning was done, I took a leisurely bath, which had become my favorite pregnancy pastime. Somewhere around 10 o’clock I sat down to play video games while Micah rummaged around in the kitchen. The game was Civilization Revolution, though I’m not sure if there is any real significance to that detail.

Even now, months later, I can still remember the exact moment that marked the beginning of the most drastic, painful, and sweetest 24-hours of my life.

It was 11:30 pm and I was sitting on the couch, playing the video game and laughing with Micah. He had just teased me about something and I had laughingly cried out in outrage. And with that burst of laughter came a burst of a different kind. All of a sudden, I felt as though I had lost complete control of my bladder, but I could tell that it wasn’t my bladder. Micah says that he heard my gasp and looking up, saw me make a mad dash for the bathroom. Later, he said that he had never seen me move so fast during the whole nine months of pregnancy.

Sitting on the toilet in the bathroom, I sat there in stunned silence as this liquid gushed between my legs, and I had no control whatsoever. I remember thinking, “this is it."

“Micah,” I called out in a wavering voice, “I think my water broke.”

His footsteps came down the hall and cracking the door a little, he peeked inside the bathroom, as though opening the door would somehow hasten the impending situation.

“Not really,” I said hesitantly, “I’ve never had my water break before.”

We sat there for a while, letting my body empty out, then, pulling out one my extra-heavy pads (hadn’t used them in 9 months!), we retreated to our bedroom. The funny thing is that if *it* had waited just 15 more minutes we would have been in bed and then it could have been a potential mess. Instead, we just had a couple of drip-drip-drips on the carpet… and one thoroughly-soaked pair of yoga pants.

At midnight, thirty minutes after the initial breaking of my water, we called his sister even though it was 2 o’clock in the morning her time. But she had studied to be a midwife and had five kids of her own and so if anyone should know if my water really did break, it would be her.

A few minutes later, we hung up, our fears? worry? hope? confirmed. My water had indeed broken and Baby could come at any time.

The next step was calling the parents, and even though it was early in the morning (as in 3am for my parents and 1 am for Micah's mom), and they were really tired, you could still hear the excitement in their voices. This was really happening, they were about to become grandparents!

Taking a deep breath, we called the number on the business card that my midwife had given me, connecting me with the delivery wing of the ER. Explaining the situation and my symptoms, I was told to go ahead and come in since my water broke and that could be potentially dangerous for the baby if I did not go in labor within the time window. It had been our plan to do most of my laboring at home, but I guess Baby had a different plan.

Throwing a few things into a daybag, we got in the car and drove the ten minutes to the hospital. At 1:30 am, we were officially admitted to the hospital and sent upstairs to the labor and delivery unit. Up until that point, I had no experienced the slightest pain or discomfort. In fact, there was absolutely no sign that I was going into labor, except for the fact that my water had broken.

We got into the elevator and pushed the button for the second floor, where the L&D unit was. It was then that reality set in as I experienced my very first real contraction.

The feeling was like none other, the closest thing I can liken it to is a woman’s monthly menstrual cramps, but even that does do it justice. It literally felt as though my inside “woman parts” were being stretched and tugged in ten different directions at once. And in a way, they were.

Once we reached the L&D unit, they signed us in and took us to one of the examination beds, hooking me up to a bunch of monitors to make sure Baby was okay and to see what was going on down there. Since I had said that I thought my water had broken, they took me into a private room and the nurse said that they were going to check and make sure that it was my water breaking and not just typical leakage. Apparently, some women can leak before the labor actually begins, but it’s not the actual sac emptying out. She had this small container that couldn’t have held more than a cup of liquid at a time and placing it under me; she began to feel around on my rotund belly. All of a sudden, her eyes got big and she withdrew the container… it was overflowing. Looking me a she gave a sheepish smile and said, “Yep, your water broke.”

With that confirmed, they took me back to the examination bed where I was hooked back up to the monitors and waited while they readied my room upstairs. At 2:30am, they wheeled me upstairs where I was happily surprised to find that I was in the very room that we had toured during my pregnancy group tour! Feeling relatively at home, I hopped up in bed and laid back, trying to get as much rest as possible before all the torture, er, labor began. After about an hour’s sleep, at 4am, it began.

And let me tell you, back contractions hurt!

For the next four hours, I had irregular contractions, nothing overly painful, just more uncomfortable than anything else. I was still able to get some rest in-between the contractions, which were every 10-15 minutes (with small twinges between that).
Eight o’clock that morning marked my official start of labor, with contractions being 4 minutes apart, 45 seconds to 1 minute in length.

There was no stopping it now... ready or not, this baby was coming!