Before Caleb was born, Micah and I had every intention to fix up a cute baby nursery. Then, about two months before he was born, our rent was raised and so we knew that not long after Caleb was born, we would be moving, so why bother decorating a nursery only to leave it in a few weeks?

Well, once Caleb did arrive, Micah and I decided to co-sleep for the first few months, which was facilitated by our moving and the crib being used to hold all of Caleb's baby stuff, I'm ashamed to say.

Now we've lived here for 3 months and have (finally) gotten everything unpacked, put away, and on  its way towards becoming a decorated, attractive, and comfortable home. A milestone also took place last month as Caleb moved out of our bed into a bed of his own! Up until this point, we've been using the bassinet portion that came with our travel yard, instead of his actual crib. In fact, he's actually only slept in his crib once or twice. Just never really had a reason to until now.

But now Micah and I are ready to fully reclaim our bedroom for ourselves (and are looking forward to speaking louder than a whisper)! However, before we can move the kid, we have to have someplace to move him to. We have a second bedroom, which is technically his room, but up until now it's been used for a guest bedroom and a junk room, anything but a nursery.

Yet the ideas are swirling around in my head.

We have an awesome giveaway scheduled for later this month and the items that I'll be reviewing are intended for Caleb's room, which means motivation and accountability!

After spending countless hours pouring over pictures of nurseries, I think I've found what I want to do for Caleb's room:

Visit the Wee Decor Website
Don't you just love the colored squares? They're so fun! After talking about it, Micah and I would like to do his room in greens, blues, and browns, with a bit of orange-gold accents.
Something like this for the color scheme:

The great part is that we already have several of the colors! The green will be the same aloe vera green as our living room, and the blue is a bright, yet serene blue that is intended for our bedroom. The brown squares will use the same latte brown as our dining room and kitchen. The one thing we don't like is the actual brown on the walls in the pictures, we feel as though it makes the room to closed in, plus it would be a nightmare to paint over when we move. So, we're going we paint two of the walls the green, the one wall that is taken up by the closet doors is being paint blue, and then the main wall that everyone sees (by the crib) will have the squares on it.
While down in Montana, one of Micah's cousins made a really cool banner using scrapbooking paper and a sewing machine! She cut the scrapbooking paper (which is thicker, more like card stock and comes in adorable patterns) into triangles, and then sewed them all together in a long line using a sewing machine. The result was a really beautiful, yet fun, banner that they used for the grandparent's anniversary party. The pictures I took are on my home computer, so here are the instructions for something similar, but they used fabric, yet the result is still the same = fun and pretty! 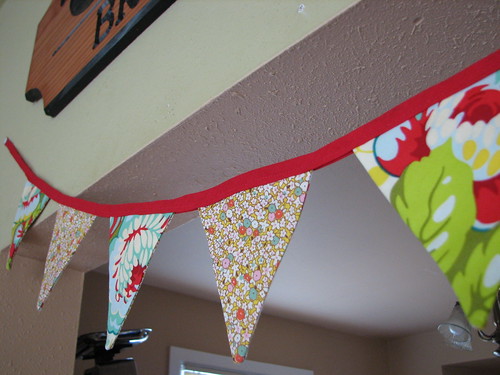 I want to make one of those banners, hopefully making enough so that it could go all around the room, sort of as a high border.
Of course, Caleb will have pictures on his wall, that's a given, plus hopefully some original artwork. I want to take some canvases, paint them a solid light color, and then do his handprints and footprints on in a darker color. And I do want his name in the wooden letters, but I want to do designs on them, like polka dots, stripes, and swirls, to kind of dress them up a bit. He'll eventually having the wooden rocking horse that his daddy is making for him, but in the meantime, he'll have his toys and books, his little chair, his clothes cube dresser, the crib... just to name a few things.
I'm a little lost though, what do you NEED in a baby's room? Do they really do much more than sleep in there until after they turn one? Right now we spend most of our time in the living room or in our bedroom, so I'm not really sure how the dynamics are going to change afterward.
Overall, we want the theme to be monkeys as not only does he looks adorable in monkey outfits, but his daddy's nickname is Monkey Micah, so don't you think it fits perfectly? We almost decided on doing firetrucks (since his daddy is studying to be a firefighter) but since this is not our permanent home, we want to give monkeys a go and see how we like it.
So what do you think? Like? Dislike? Does anyone have any decorating tips? Any advice?
I'm so excited that I want to get started tonight, but sadly it will have to wait until at least tomorrow :/
m.
Collapse