Last week Caleb started doing this thing where he would wake up in the middle of the night starving (or so he thought) and not be happy unless he joined us in bed. Well, it's okay for one night during a thunderstorm (or fireworks!) but Micah and I wanted to be sure and nip that kind of behavior in the bud. Thursday, Friday, and Saturday night Caleb did perfectly, going to bed, and staying asleep until his morning feeding. The few times that he did stir during the night, I listened and heard him start to self-sooth and within minutes drift back to slumberland.

Last night was the worse night that we've ever had! It was even worse than those first few weeks of his life as at leas then we were getting 2-3 sleep at a time, for 6-8 hours total. No, even 2-3 hours for the entire night was apparently too much to ask as Micah and I only got and hour and a half of sleep!

I'm back now, with a nice checkboard outline on cheek. Stylin' I tell ya.

To make matters worse, I had drank a cup of coffee about 10pm and it was, as I found out about 3 am, a mistake. Apparently last night the coffee did more than give me an added burst of energy, it had me seeing things in the shadows, hearing doors and windows open when they were firmly shut and locked. At one point I reached for the .38 by the bed because I was convinced that someone had come into the room.

Apparently the shoe rack on the back of the door looks like a person when it's pitch black and I don't have my contacts in.

Yet, if you can believe it, none of that even came close to the dreams I had when I finally did fall in a fitful sleep. Nightmares assaulted me, one right after the other. And not your typical forgot-to-wear-underwear or being-chased-by-a-giant-marshmallow. Instead, my dreams were filled with murders, kidnappings, torture, and things that made me wake up in a cold sweat.

And the baby wailing in the background certainly didn't help during the kidnapping scenes.

I don't know what was bothering Caleb. From 1:30 to 4:00 he did not sleep for longer than 10 minutes at a time. Nothing would soothe him. Not feeding, not changing, not cuddling, not rocking. Nothing. And to answer the unspoken question, he never had a day of colic in his life, and I haven't heard of cases coming up this late in life?

Finally there was nothing we could do but let Caleb cry it out until he got whatever it was out of his system. Micah had gotten about an hour of sleep already (oh yeah- while I was having caffeine-induced panic attacks, Micah was overheating to the point of him standing by the open window, trying to get some relief), so I left him burying his head underneath the pillow, grabbed my own pillow and went downstairs to sleep on the couch.

Now there is a reversal for you. hehe.

Our walls and floors are thin enough that I could still hear Caleb crying but it wasn't nearly as loud. After about 20 minutes, he finally conceded and fell asleep.

In case you didn't realize it, that's just an hour and a half.

I went upstairs and of course Caleb began to stir as I was getting ready so that I had to feed him and then put him back to sleep while we finished getting out the door. Micah is doing Coast Guard all this week so that means Caleb goes to the babysitter. :) Oh boy. It also means that I have to wake up 45 min earlier and leave 30 min earlier. Oh well.

When I woke Caleb up, he was nothing but smiles and didn't act the least bit tired, even though he had only gotten 4 hours sleep, most of it broken up. His eyes were wide open, and I could just hear what he was thinking... 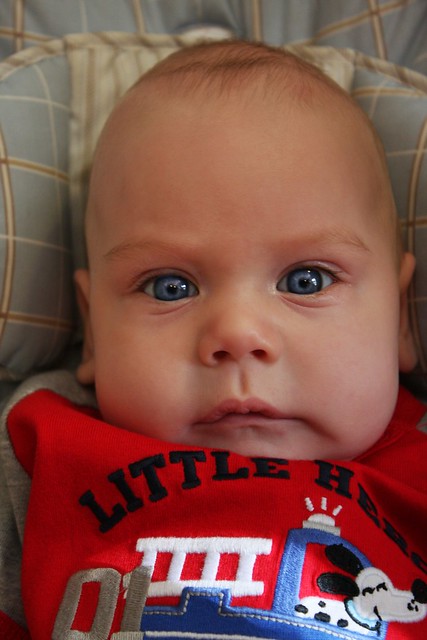 "Sleep? Who needs sleep?
Not mommy and daddy.
I will never sleep again!
Mwwwhahahaha!"