It happened again today. The third time in a two-week period. Or was it the fourth time? Either way, it wasn't good!


What? You can't read that? Oh no worries, it wasn't anything important. So, how about them Yankees?


I do believe that I had three heart attacks.


And to top it all off, Caleb was awake and staring at me with those big blue eyes of his. Hmmm.. well at least he woke up, though I'm sure that Micah wished that he would have stayed asleep! Each of the times that I have overslept, Caleb has been the one to wake me up, usually with him getting hungry, or just sensing that I'm still there when I'm usually gone. Thanks Caleb! Of course, we won't mention that the reason why I am so tired is because of you, won't we?


Jumping out of bed, I raced into the bathroom, jammed my contacts into my eyes (dropping one in the process and having to search for it for several minutes, only to find it caked in dust- ugh), pulled my hair back into a ponytail and twisted back my bangs. Then I ran back to the bedroom and attempted to find my good black skirt. You see, I was going to wear jeans today, as I normally do on Thursday and Friday, but I found out about 4:00 last night that the Wing Commander's Wife would be coming today to select furniture for her home (remember- I work on Elmendorf Air Force Base, at the Furnishing Management Office, ie. FMO). Everyone at work was on a cleaning frenzy yesterday, and since I am the first person someone sees when they walk into the office, I wanted to present a bit nicer picture that jeans and a shirt.


And to do that, I needed my black skirt.


Which I couldn't find.


I was running late, so that automatically means that everything I need to find, I can't find. After all, doesn't that come right after Newton's Law?


Micah finally helped me find my skirt, which had somehow managed to find itself buried under his pile of clothes (go figure?), so I finished getting dressed, went downstairs and gathered my million bags together, grabbed two packages of instant grits for my breakfast and stuck them in my purse, along with some Ramen noodles for lunch, an apple, and some Triscuits.

By this time, it's 7:15 and I only have fifteen minutes to do the most important thing of the morning: pump.


The only problem was that Caleb had been feeding on me recently and so I didn't have much left to pump, so in the end I was only able to get half of my normal amount, which means that I'll be coming home during lunch time in order to feed him and drop off my "production". We needed extra for today because I'll be going grocery shopping at the commissary after work and he'll need the yum-yum until I get home. But we'll manage, right? I mean, what else are we going to do?


On that note, does anyone have any advice for increasing milk production? Right now I'm producing enough for the day, plus a little extra for when we have to be out and about and I can't feed. There used to be a good supply in reserve but this past month's activities have depleted those until we're barely squeaking by. I'm going to increase how often I pump (from every 3-4 to every 2-3), and I'm making sure to drink plenty of fluids, etc, but is there anything else? Any specific type of food or herbs that help? Or just some great thing I'm missing? Any advice would be greatly appreciated.

Caleb has become mobile! Since I'm at work all day and Micah only has night classes (he's in his last year of studying to be a Firefighter/EMT), he's a SATD (Stay-At-Home-Dad), which is pretty awesome considering that we don't have to put Caleb in daycare, and that Micah WANTS to stay at home. Not many men would, you know what I mean?


Anyway, over the last week, Micah has been telling me how Caleb is trying to roll over from his back to his tummy! He'll put Caleb on his mat to go get a drink or something, and when he comes back, Micah will find Caleb on his side, pretty disgruntled that he just-can't-get-that-last-little-bit to go all the way over. It's a bit surprising cause from what I read, babies usually do the tummy-to-back roll first, at 3-4 months, and THEN the back-to-tummy roll at 5-6 months. But Caleb has it backwards. He's trying to do the back-to-tummy and has almost got it, meanwhile the tummy-to-back just seems to allude him. Weird kid.


But the biggest news is that Caleb has started scooting!


Micah took this yesterday while I was at work. See that beige pad there on the right? When Micah put him down for a nap, he laid Caleb's head at the top, with his body underneath the blanket.After about 30 minutes, he started hearing some funny noises on the baby monitor, which is on the left, out of the shot. Going upstairs, this is what he found:


By a combination of wiggling and pulling himself along by grabbing the sheets, Caleb had managed to scoot halfway across the bed! Super funny but disturbing, too. Looks like he won't be taking any more naps on the bed. It's time to set up the play-yard!


Ahhhh! My little boy is growing up and I'm not there to see it! I'm so thankful for my thoughtful husband, to know that I want to be a part of these special moments. Love you, babe.


So, how about it? When did your babies first roll over? When did they start scooting?

I was reading Alysha's Thankful on a Thursday post "Fast Forward the Moments" and I was struck with the emotion of it, and how it made me stop and think about how many times that I've done that very thing: wish away the present in anticipation of the future.


Well, actually, there is a difference. A big one.

Caleb is only 3 months old and I already miss my little snuggle bunny. My little one that had such tiny fingers and toes, who would sleep, eat, and snuggle. And poo, but we won't ruin the moment by talking about *that*. He was so little and needed us every moment of every day. I loved being needed like that.


Now, he's a "big boy"--- He's more than happy to just sit there and watch the cat, play with his hands, or stare at the rows of brightly colored books in the bookcase.


The thing that really is getting me though is that I am not there! Instead, I'm here at work, away from my precious, adorable, wonderful little boy. It all works, because at least he's with his Daddy and they're creating this fantastic bond.... but I can't help but feel left out at times. I call during lunch time and Micah has all these stories about the cute thing he did, how he is learning to roll over and scoot, and I'm not there to see it. Micah's good about taking pictures and videos, so I can share in the memories at least a little, but it's not the same, you know? I want to BE there.


And I will be, someday. When Micah finishes school and gets established at a Fire Department, then I will be at home.


But that seems so far away. My boy is growing up NOW. I won't get these times back. Even as I wish that the next year would hurry up and past so I can stay at home, when I hold him in my arms each night, I want the moment to last forever. I don't want the morning to come. I want to just sit there, hold him, love him...


Now I realize that all this crying and lamenting is really the opposite of "Thankful on a Thursday", instead it's more like "Whining on a Thursday", but in spite of this conflicting emotions, I do have much to be thankful for.


The real difference comes to the fact that when on the Gov computers, you can't do a lot of basic stuff, including change your background. It has the Air Force logo, and that's what you're stuck with.


Well, out of all the computers on all the desks, I have one of only two Tunista computers. And guess what we can do--- that's right--- change our background! That means that every time I pull up my computer screen, I see this adorable face: 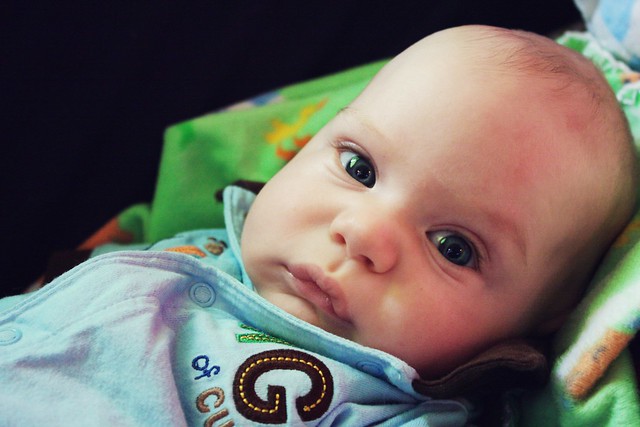 That makes me happy. I am thankful to have the ability to change my background, just so I can look into his big blue eyes and not miss him quite so much. That alone helps make the day bearable. Something so simple, means so much. Out of all the jobs I could have gotten here on base, God led me to the one that would meet the desire of my heart. He knows. He understands. He cares.