That's kind of what it feels like: as though I'm abandoning my baby.

Today is my first day back to work... sigh. I knew it was coming but I wasn't prepared for how strange it would feel. First of all, I was pregnant when I first got the job so there hasn't been a time for me here that I haven't had a baby bump. I used to sit here at my desk with the keyboard on my belly as my then-gender-unknown baby literally kicked the keyboard off my stomach. Yeah, didn't like being squished, I guess.

I mean, I love holding Caleb in my arms, but a part of me misses that closeness that we shared, just the two of us. Oh well, the seasons of life, right?

Work has been... interesting. A lot has changed while I've been gone and it is taking me a while to get back in the swing of things. Also, I found that while I did manage to drive on auto-pilot here, my brain neglected to remember the different CLIN numbers for our reporting and classification system, so I actually had to reprint a work order three different times because I had put the wrong CLIN on them. That's right, same building, same ROOM, and different CLIN numbers.. sigh. Then, when I gave my boss the corrected copies... oops. You guessed it. Wrong again. I put DORM instead of LODGING.

Speaking of home, I went home on my lunch break and saw my baby! He was sleeping peacefully and I didn't have the heart to wake him... for about two seconds! Then he was in my arms and I was cuddling him close. He opened those sleepy blue eyes of his and squinted at me, then threw his eyes open wide and gave me the dirtiest look that said, "And just where were you earlier, Mommy?"

Yes, I love my baby. My little boy.

Okay, moving on. I could gush about him all day.

We have a newborn photo session this Saturday. Fun! I need to finish our facebook page and blog now that we have internet at our new place.

Ah. Moving. Don't get me started on that. At least now the kitchen is unpacked all except for two boxes of casserole dishes and the like. The kitchen is a bit smaller than our last one, but has more cabinet space (go figure?). I still drool over the kitchen in the Pioneer Woman's lodge. Who doesn't? It's big and beautiful! 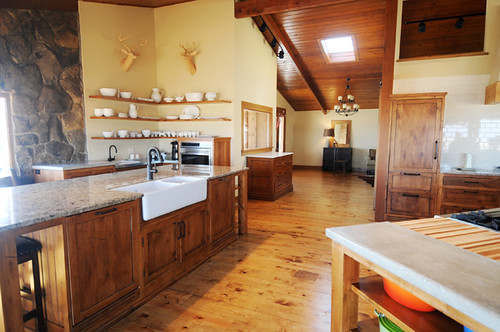 Meanwhile, the living room is emptying quickly. We'll see if Micah has managed to get anything done while I've been on work since he's been on baby duty all day. Last night we declared an official "Break" and ate chips and dip, ice cream, and watched NCIS. It was a MUCH needed break from the go-go-go of this past weekend.

The go-go-go consisted of it being Grandma's last weekend before she went home, us packing up until Thursday, then moving all day on Friday, setting up for the photo fundraiser at church on Friday night, then the fundraiser all day on Saturday, and then I had my college graduation ceremony on Sunday and Grandma left Sunday night.

Add to all that stress many tears as sometime between 2 am Sunday night and 7 am Monday morning, Milo disappeared. Yes, our "other baby" Milo. That first day "(and every day since) we searched every cabinet, closet, nook and cranny possible- but no kitty. Micah went in the attic and the crawl space, even looked behind the drywall. Still no kitty. We went around shaking his food dish, which anyone that knows Milo knows that he'll coming running in .1 seconds if it involves food, but once again, he was no where to be seen. Or heard. Or anything. We've left the food dish out since then and it hasn't been touched in the three days, nor has his litter box.

Milo is not in the house.

The best we can figure is that since we left the upstairs windows partially opened (about a foot open on each), he must have jumped out the window sometime during those five hours. He's never lived in a two story house before and the only other time he went out a window was when we lived in the basement apartment at Beaver Place and so he walked out straight onto the pavement. Likewise, the windows at Camelot had screens and the only time he went near the outside was at the slide-glass door, again, ground level. But if he went out the upstairs window... that is a long way down.

We don't know if he

1) jumped, broke something, and went off to die somewhere

2) was cat-napped by someone who thought, "Pretty kitty! My pretty kitty!"

4) met up with a nice Shelia somewhere and decided to make a home for himself (he is fixed, just to answer that question)

Or, that he's met with some other fate that we can't even begin to imagine. I'm hoping that it's possibility #5- that's he's just off for spring break and will make his way home come this weekend.

In the mean time, we've put up fliers around the neighborhood and at the bus stop, have contacted animal control and put a notice in their "Lost Pet" book, we've also went by each day to see if he's been turned in, we put ads out on Craigslist and on Alaskalist. Micah is supposed to be going to the neighbor's and asking if they have seen him.

We want our kitty back!

So continue to pray please..