It's pretty sad when even my Dad complains about my not blogging anymore.

It's pretty sad when even my Dad complains about my not blogging MORE.

Sometimes, I'd even like to blog several times a day.

And some days, I do.

But sadly, those days are far, far in the distant past. And will most likely not be in my future for a very long time.

At least not until a certain little boy sleeps through the night.

I'm told that can happen anywhere from 6 weeks to 9 months.

Hopefully he'll be the 6 weeks.

Okay, so to stop the rambling, let's actually pass along a little bit of a news update:

Thursday morning we took Caleb in for his very first doctor's visit. Such a big boy! Of course, Caleb had to make a good impression by peeing all over the scale when the nurse went to weigh him. Sigh. Diaper #1. Then he had to show off for the doctor by pooping just as he was getting all his limbs checked out. Diaper #2. And then later when we were answering the doctor's questions about Caleb's sleep habits, he just had to poop again. Loudly. Diaper #3.

Okay kid, put a cork in it. Literally. You can't be going through so many diapers if you ever want to go to college someday.

At this rate it'll be "Bob's House of Learning" for you!

And I hope you're smart and can get a scholarship, otherwise you might not even make it in there!

After leaving the hospital and running around like chickens with our heads cut off for the next few hours, we ended up at Burlington where Mom (finally) found Caleb the PERFECT Easter outfit. We can't wait to show it off tomorrow. Pictures will be taken in excess.

After all, I promised the grandparents.


Side note- Who knew that listening to Caleb coo in his sleep over the baby monitor would be just as peaceful and comforting as the real thing?


We also went by the leasing office to sign the lease on our new place! But you already know that from my other post "Home Sweet Home", the one right below this one. If you don't know what I'm talking about then you obviously didn't read the other post and should do so as soon as possible to avoid further confusion.


Thursday night ended with tears as I realized that Momma would be leaving in the morning...

...Friday morning began with tears as I said goodbye to Momma.

After Mom and Micah left for the airport I buried my face in my pillow and just cried some more. But then a blessing happened and Caleb woke up, crying to be fed. Never was I so glad to have a hungry baby! As I held him close, I allowed my tears to fall, even as I was comforted by his tiny baby fingers grasping mine and his soft, little head as it nuzzled against my chest. He looked at me with those big eyes of his and I could feel the love wash over me. A mother's love. The same love that Momma had shown me for these past two weeks.

Without going into more tears (not an easy thing, by any means), let's just say that I've missed Mom.

Moving on before I can't see the computer screen anymore.

One huge area that Mom helped in was keeping the house clean so I could concentrate on recovering and getting used to be a mommy to Caleb, a job in and of itself. But since Mom left, I've had to learn how to juggle all these roles, which is not an easy task. Especially since I have only been home 12 hours total since Mom did leave.

Right now our Xterra is out-of-order due to a busted timing belt and is currently in Matt's garage getting worked on (which is where Micah is now). As such, our days have been a might hectic as we've borrowed three different vehicles trying to get everything done that needed to be done (Thank you Matt, Larry, and Heather and Jeremy!!!). I tell yu what, it's not easy running errands without transportation. In fact, it's downright inconvenient. Micah has been working like crazy since yesterday trying to get the Xterra up and running. He's basically pulling an all-nighter tonight so we can hopefully have our OWN transportation back come tomorrow. After all, once the work week starts people will need their vehicles and we will still need more diapers. Sigh.

In GOOD news, we had a photo session this afternoon with some repeat clients from last fall. This family has become more like friends and we were delighted to be able to have the chance to work with them again. And to have the opportunity to book them again for the future. From all appearances, we will be their go-to photographers for everything from Christmas photos to school pictures.

It is so wonderful that Micah and I are able to share our love of photography like we do. It's not many couples that not only have the same hobby and passion, but can actually do it together without biting each other's heads off. Now, of course we nipped each other a few times back at the beginning, but we've worked out a nice partnership since then. Teamwork in action.

Of course, if you think that's something, you should see us cooking together. We make magic in the kitchen!

Aright, I think it's time that this post be drawn to a close. I'm sleepy and we have the Easter Sunrise Breakfast in the morning and 8:30 comes early. And 6:30 comes even earlier since that is when we have to get up in order to be at the church by 8:30. Micah and I used to be able to get up, get ready, and get there (early in fact!) within an hour.

Not with Caleb around now.

A baby really does change everything. It takes twice as long to do anything.

Or so I've discovered.

And just wait until we have more kids. Then it'll be, "Early? What's early?"

Easter is a day to not only celebrate the resurrection of our Lord, but also a chance to get "gussied-up" and take family pictures! Prior to this, we have only taken 2 family pictures, one at the hospital when Caleb was brand-new, and one while Downtown with Mom. But Caleb was covered up in the carseat in the second one, so that doesn't really count. So for all intents and purposes, this is the first REAL family picture we've taken since Caleb made our little family complete. 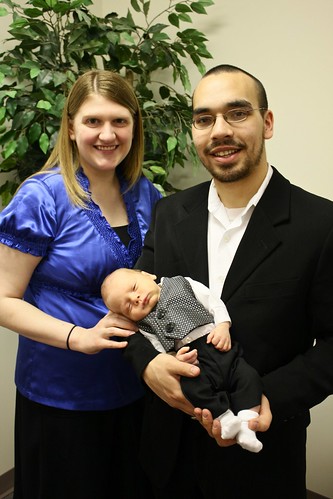 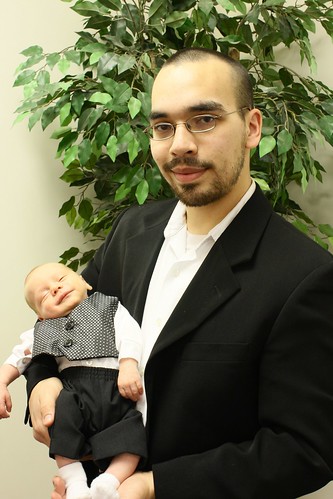 Caleb dressed up in his Easter best, thanks to Grandmom! 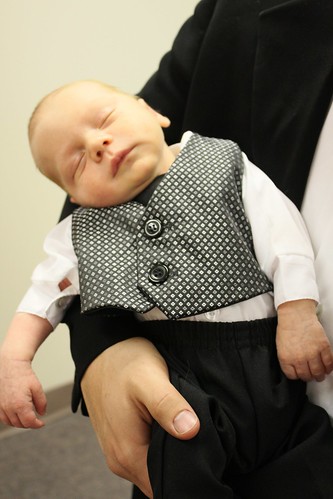 Caleb liked the Easter Bunny that we got him! 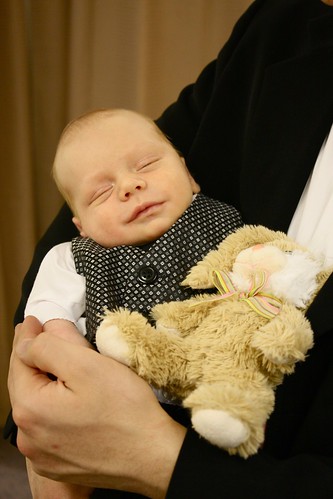 I'm very thankful for my growing family- my wonderful husband and my sweet boy! Love you, guys!