I'm one of those horrible people who only get a hair cut every six months or
so. Between the time it takes, the hassle of actually going down there, and
the $$, it's just not something I get around to doing very often. But I'm
also one of those people who need to get a hair cut every two months. Yes,
I'm a walking contradiction. My hair stays really dry, especially up here,
and I get split ends like crazy. In fact, by the time I go in for the
bi-annual haircut, my split ends have split ends.. and sometimes those split
end's split ends have split ends. The beautician usually ends up having to
cut off anywhere from an inch to 2 and a 1/2 inches in order to get rid of
all the split ends. And that stinks. Especially since my hair grows slow
enough as it is, I don't have the extra growth to go around losing 4 or more
inches a year. I want those inches. I like those inches.

So, my mid-year resolution is to attempt to get my hair cut every 2 months,
or at least every 3 months.

One of the main issues I have always struggled with is the outrageous price
of hair cuts. I'm not about to pay upwards of $40 for a simple cut, and
extra for a wash and style. It bugged me so badly last year that I waited to
go home for the Assembly and Christmas and just got my hair cut there, but
it was still $12 ($9 with a coupon) for a simple cut, again, extra for a
wash and style.

Well, thank you to Mom Peter.

Earlier this spring she told me about a place called Trendsetters. They have
three regular beauty shops in town, but they also have a beauty school where
they cut hair. Now, growing up back in GA, Mom would always take us kids to
the beauty schools or dentistry schools in order to get our hair cut or
teeth cleaned. It's simply cheaper, and the usually do just as good a job as
anywhere else.

Here, trendsetters is no different. I had gone for the first time back in
April, when Mom Peter had come into town for a visit, and I loved what they
did. But, I've been putting off going back. Bad Megan.

Yesterday was Columbus Day, and as such as I had the day off (paid holiday!
woohoo!). I took Micah to school, went back home and ate breakfast and read
for a bit, then ran some errands to fill up the time until when I would pick
him up from school. With paid time off, a sunny day, errands completed, and
an hour to spare, there were no longer any excuses standing in the way. It
was time to get my hair cut.

I walked in, told the girl my name, and sat down. Four minutes later (not
five, four...), "Sophie" came and got me, took my coat and hung it up, then
led me back to her chair. She had me place my purse under the counter,
wrapped the plastic sheet around my neck, and then took me back to the wash
station. There, I was treated, once again, to a nice shampoo where she
massaged my scalp as she worked the shampoo into a lather. It was soooo
relaxing... she then used special conditioner to give my hair some added
moisture. Once I was all rinsed, she took me back, asked me what I wanted,
then proceeded to cut and trim my poor, poor hair. Sure enough, I had to
lose an inch and a half because of all the split ends. *Sniff*... I almost
cried.. my hair was just getting long again and then it had to go away...

It was then and there that I decided to try my best to get a hair cut every
two months. This is mid October so I'll get my hair cut once more in
December, right before we leave for TN/FL.

After the cut, she blow dried my hair, styled it for me, and put on some
anti-frizz serum to smooth my perpetual flyaways.

The grand total for this royal treatment? Ten dolla! That's right... $10 for
a wash, cut, and style.. Nice... I can live with that and then some!

I picked Micah up from school around 11:15 and then went to lunch at TGI
Fridays. I had gotten a coupon for a free Jack Daniel Burger, so we went,
got that and a bowl of Broccoli Cheese Soup and a Wildberry Slush. That
slush is just about the closest you can get to Sonic up here, next to Red
Robin's Freckled Lemonade. The Broccoli Cheese Soup was delish, and just
perfect considering I wasn't that hungry. Meanwhile, Micah demolished the
burger and fries. That dipping sauce is the best thing since sliced bread..
I'll put it on sandwiches, fries, potatoes, steak... goodness.. I'll just
about eat it straight!

Another trip to a library, a run to Freddy's, and Micah and I enjoyed a late
afternoon nap before he headed to school and I cleaned and organized in our
bedroom. Slow progress, but we're making it. I got our bookshelf organized,
dug Micah's books out of storage and arranged them, put knickknacks up on my
bookshelves, and hung up the picture Codi drew for us last Christmas. Slow
progress, but still.. progress!

Okay.. our BIG ultrasound is in one hour.. woohoo! I'll blog about it this
afternoon. Maybe even pictures?

cause it's as stubborn as all get-out!

We had an ultrasound today, which both of us were all excited for. Since I'm
17 1/2 weeks along, we would see a lot more than the mere 12 weeks (???)
ultrasound that we had when baby was tiny and looked like an alien. Well,
now I'm supposed to be far enough along to see the more defined limbs, and,
if we wanted to, the gender of the baby.

That baby was sooooo stubborn! Baby curled up into a ball, laid on his/her
side and refused to move. The tech had me rolling from one side to the
other, getting up and bending down to touch my toes (which I can still do!),
going and emptying my bladder, and anything else he could think of in order
to get that baby to turn around and face the camera. Nope. Wasn't going to
happen.. In fact, during the hour and a half ultrasound that stubborn baby
only looked at the camera one time and the tech was measuring something else
so he wasn't even able to get a shot of the face before baby turned back
around. But it was long enough for Micah and I both to go "oh my!"

That baby looked like a Halloween mask! Since he/she is still a young 'un
and as such hasn't "fleshed out" yet, baby is basically only skin and bones
and shows up as mostly the bones on the ultrasound. It was slightly creepy.
Okay, it was really creepy.. we went from having an alien baby to having a
skeleton baby.. oh my...

So, as you can imagine, we didn't see anything "down there" on baby. Micah's
wanting it to be a surprise but at this rate, we won't find out even if we
did want to know!

Anyway.. what ya'll are really wanting are pictures: 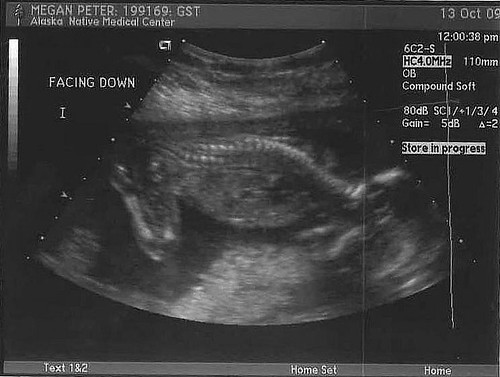 See? It actually looks like a baby now! And the print-out they gave us is
actually life-size, just over 5 inches long! 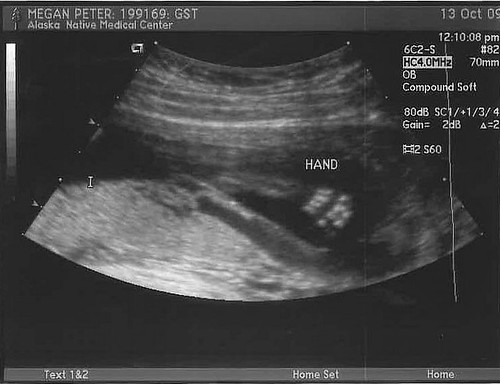 Look at the tiny hand.. the tech said that the fingers look long... could we
have a future pianist in our midst?

But baby is doing very good. The due date is right on schedule, though
personally, I hope baby comes later rather than sooner, cause of the way my
maternity leave will fall. Yeah, that's the thing. Christine, the other
woman in my office, was due on a Tuesday the day after Labor Day, go figure,
and worked right up until that Friday before. Now if I am able to work up
until two days before my due date, then my 12 weeks of maternity leave will
end the day AFTER camp ends, which means that both Micah and I would be able
to go to camp! So, I'm praying in faith believing...

Love to all, from me and baby..