Last week, well, now I guess it's been the start of TWO weeks ago, Micah called me up on his way home from some meeting or another and said, "There's two moose down here by ABT (Anchorage Baptist Temple), Let's go!"

When he pulled up just a few minutes later, I was dressed from head to toe in my snow clothes, boots and all, with the camera in my hand, ready to go. Micah got ready and then we jumped back in the car and head to the ABT, which is located at the end of our street.

When we got there, we saw a Momma Moose and a Baby Moose in the woods behind the church.

Ducking low so they wouldn't notice us, we crossed the frozen creek and hid behind trees, about 25-30 feet from Momma Moose, and took pictures. Baby Moose was closer to the road and we weren't about to get to close to him, lest we make Momma Moose a wee bit upset. 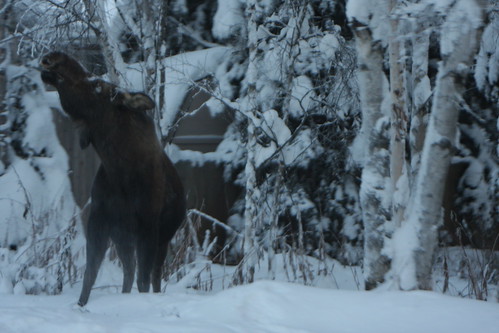 After about 10 minutes, Momma Moose started getting annoyed at me so I backed up slowly and then hid behind a power converter (or something like that), which was surrounded by a tall chain fence. I figured to putting barriers between her and I wouldn't be such a bad idea. 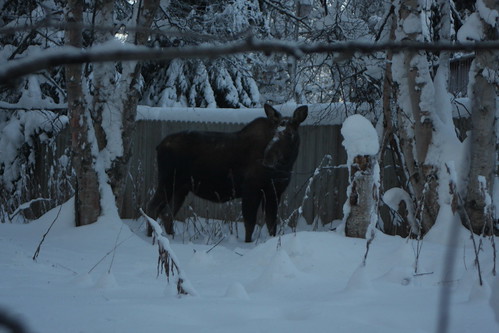 After another 5 or 10 minutes, MM took off looking for BM and they both moved out by the road, cutting us off from a direct view. So Micah and I hiked it back to the car and drove to the residential area across the street from where the moose were. Thankfully, there were two house right next to the road, one on each side. The one on the left had a nice, big boulder right on the edge of the property, next to where the sidewalk was buried under all the snow.

Due to that rock I was able to creep up right to the road and hide behind the boulder in order to take pictures without disturbing the moose. 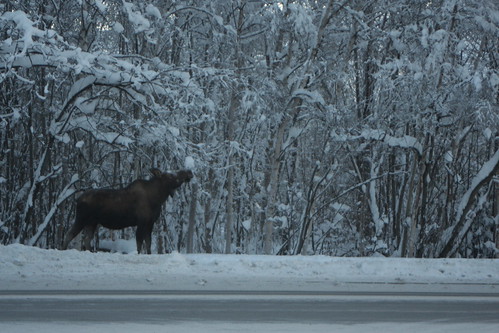 Still, it was rather far away, and without a stronger zoom, these were as good as I could do. 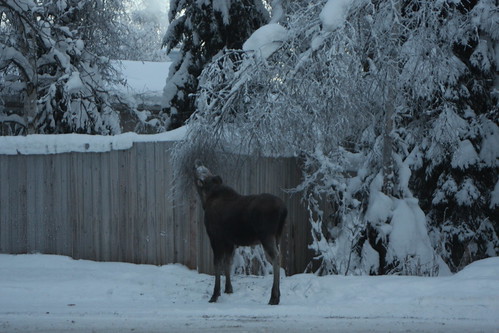 The neighbor across the street was watching what I was doing and when I head back to the car she called out and said that I could use her yard to take pictures, and recommended that I hide behind a small flatbed trailer that was by the would-be sidewalk. How nice!

This enabled me to get closer to MM. Horray! 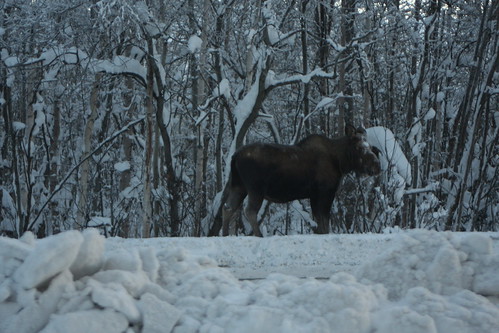 After some more pictures, Micah and I head out to take pictures somewhere else. On our way back home about an hour later, we saw MM & BM IN the ABT parking lot. Making a sharp, and slightly dangerous right-hand turn, we turned into the parking lot and pulled up right next to the moose. Being in the car, we were a lot braver than before and were only about 5-10 feet away. Oh boy! All of these next pictures are either completely zoomed out or only zoomed in a little ways due to the fact that if we had zoomed in all the way you would be seeing nothing but fur. :) 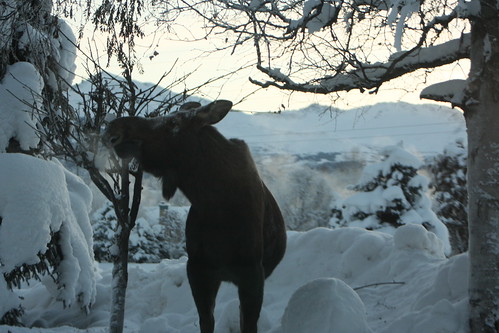 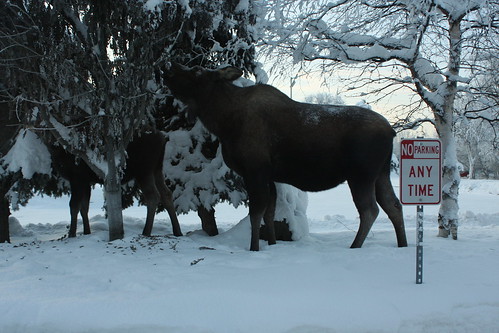 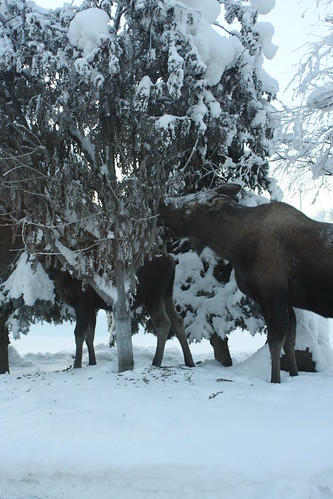 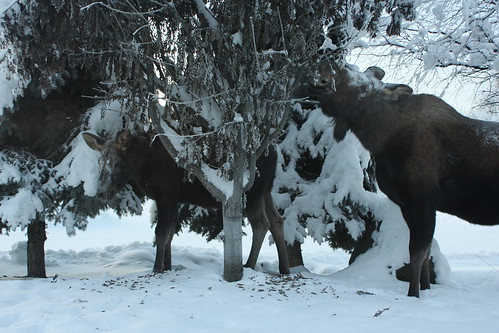 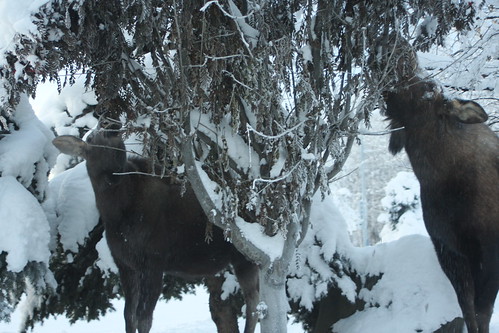 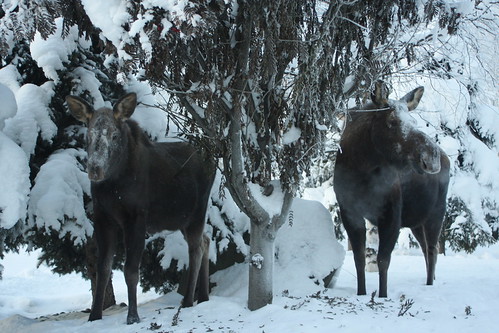 Okay, while moose are big, they are a bit, shall we say, empty-headed,as you can see in this next sequence. 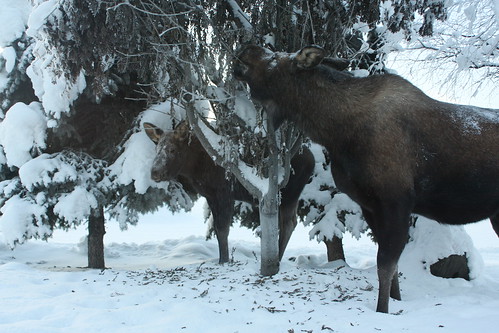 Oh wait, that branch had snow on it 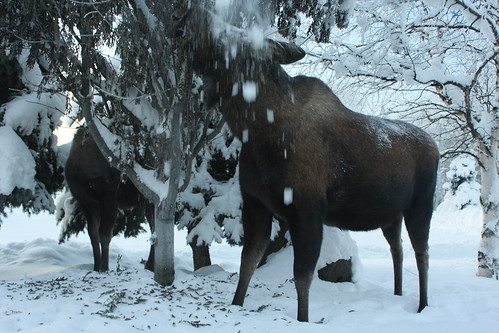 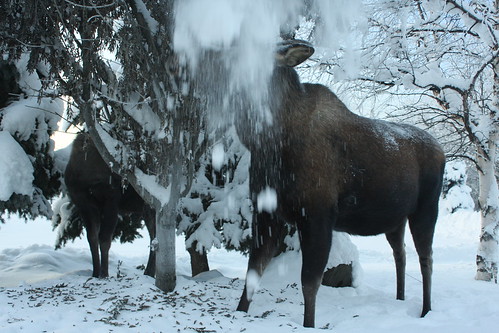 Huh! This is too much snow 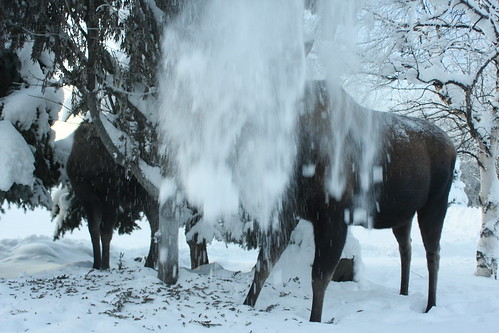 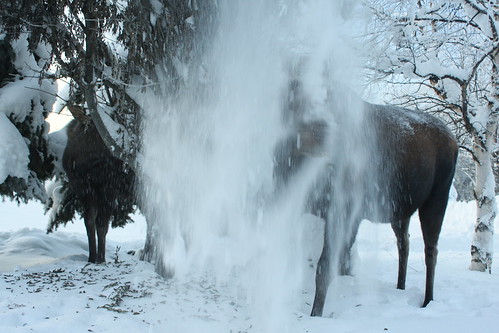 Run away, Run away! 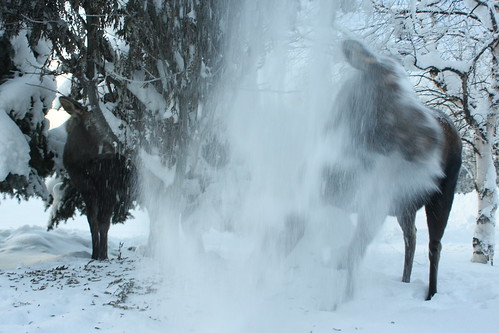 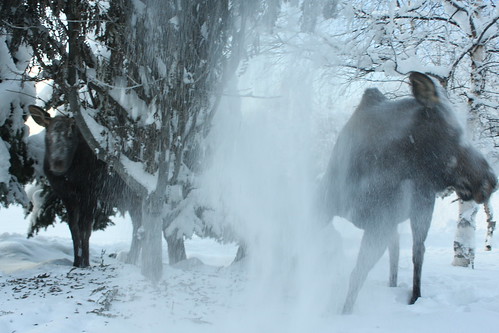 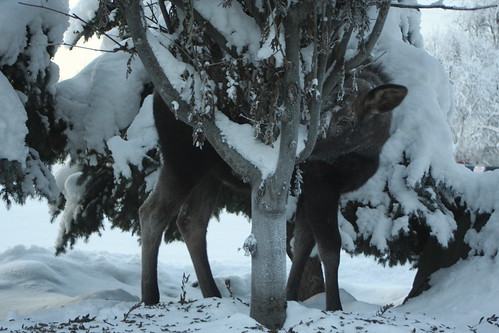 We shot pictures there for about 15 minutes, laughing at their antics for most of the time. Then they were on the move, slowly walking father into the parking lot. And we were right on their tail, er, tails. 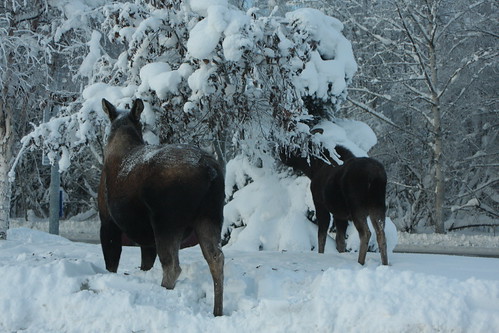 I think the snow makes her look like a horse, or a mule, or something of that nature. Yeah, a linebacker of a mule! 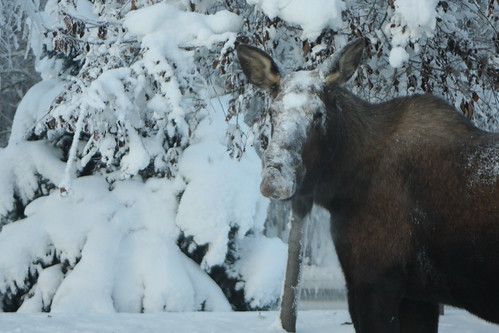 Look at the size of that thing! 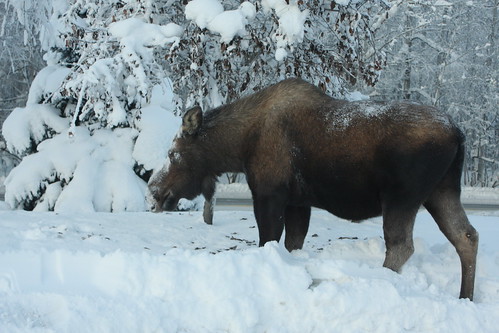 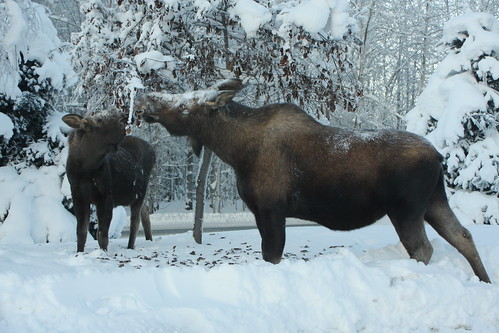 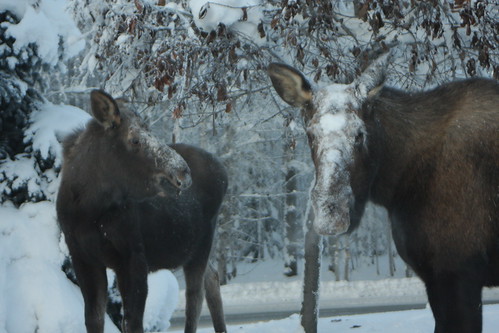 Moooooooooom! Save some for me! 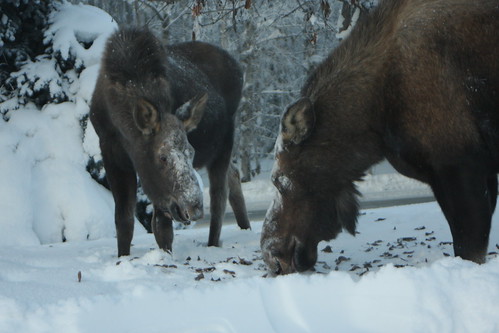 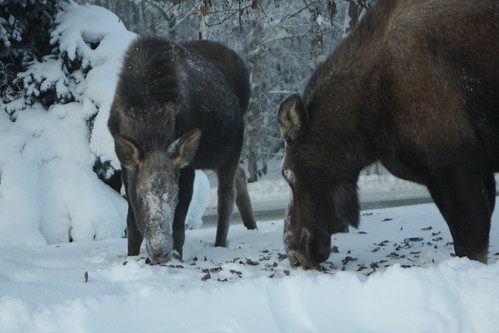 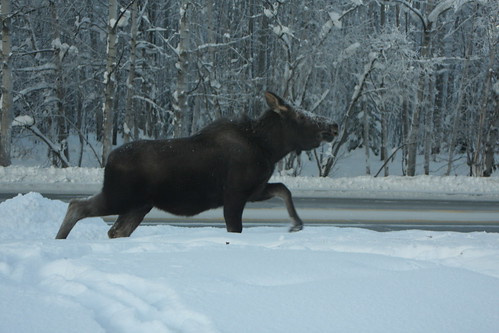 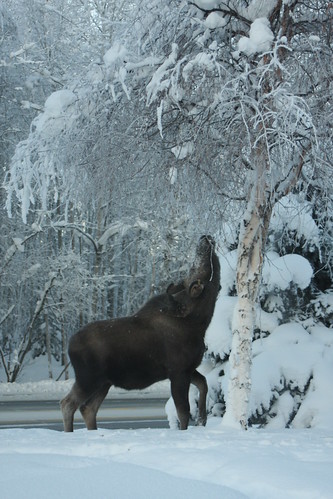 And that's it! Hope I didn't a) overwhelm you or b) make you decide against ever coming to Alaska with those things running around! hehe!

As always, you can look at the rest of the pictures on my Flickr: